Share All sharing options for: Nuggets Vs. Lakers Score Update: Los Angeles Leads Denver 48-42 At Half

The Denver Nuggets are narrowly trailing the Los Angeles Lakers 48-42 at halftime in the decisive Game 7 of the 7-game series.

PF Pau Gasol has thus far led the Lakers' attack, leading both teams with 13 points -- including a last-minute tip-in before halftime -- and 7 rebounds. Gasol scored only 3 and 9 points in the Lakers' two previous games, both Nuggets wins.

The Nuggets offense, meanwhile, has leaned on the play from PF Al Harrington who managed to score 8 points in only 10 minutes of play. Unfortunately, Harrington -- who refused to wear a mask to protect his broken nose -- took a hit to that sore spot and found himself on the bench with an ice pack: 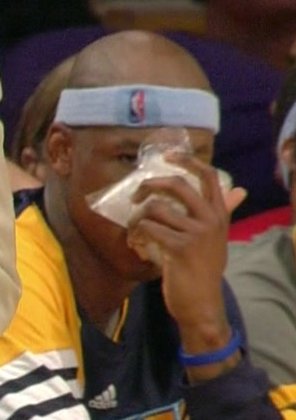 C JaVale McGee, shooting 0-for-4 from the floor with 5 rebounds and only 2 points, clearly did not enjoy the fast-paced direction the game had turned:

For updates, stay tuned to SB Nation Denver. For more in-depth coverage, head over to Nuggets blog Denver Stiffs. And for updates from around the league, check out SB Nation's NBA news hub.