NBA 2K12 Players Ratings, Rosters Are Out: Denver Nuggets Same As The Old Ones

Share All sharing options for: NBA 2K12 Players Ratings, Rosters Are Out: Denver Nuggets Same As The Old Ones

When NBA 2K12 drops in stores on Tuesday, Oct. 4, fans will be able to take control of their favorite teams and play with their 2010-11 teams. Of course, the NBA lockout ended free agency for the time being, which means we're all playing fantasy basketball this season. Now you can have all your favorite Denver Nuggets who went to China back in the Mile High City.

Check below the jump for a partial Denver Nuggets roster. 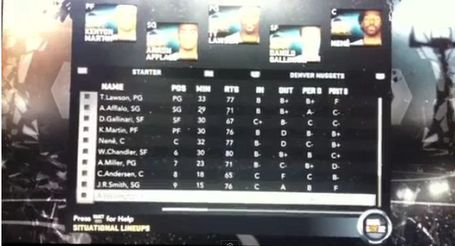 via NBA2K12Stuff on YouTube (video contains roster shots for all teams)

Uh ... so Wilson Chandler, who is in China for real this season, is the highest rated Nugget on this screenshot. Good luck playing with this team. How does Wilson, who struggled in his time with Denver, rate higher than Ty Lawson?

And you won't even have rookies Kenneth Faried and Jordan Hamilton since there was no deal in place to have rookies. That means they won't be added until a new CBA is signed and the rookies ink their contracts.