Bernie And Rocky Rappel Down Denver Building For Charity

Share All sharing options for: Bernie And Rocky Rappel Down Denver Building For Charity

It's the offseason for the NHL and the NBA is in a lockout, so Bernie and Rocky have plenty of free time on their hands before the Avalanche and the Nuggets start up again. And on Friday, the two decided to help out the Cancer League of Colorado by rappelling down a 31-story building. 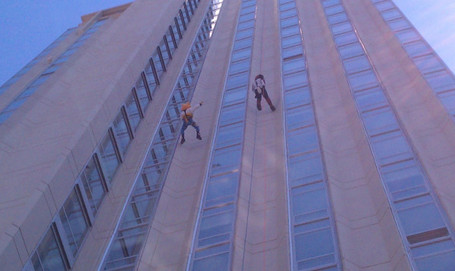 No word yet on who reached the bottom first, but I must say that it must be even more difficult doing it in a costume. Now, it might have been more spectacular if Rocky started doing flips and whatnot as he went down, but it never really is the time to do all that dangerous stuff.