Share All sharing options for: PHOTO: George Karl Reacts To Missed Foul Call, Expresses How Everyone Feels After Game 2

During the first half of Wednesday's game with the Oklahoma City Thunder, Nuggets' head coach George Karl was, rightfully, upset over a missed foul call after Serge Ibaka made contact under the basket: 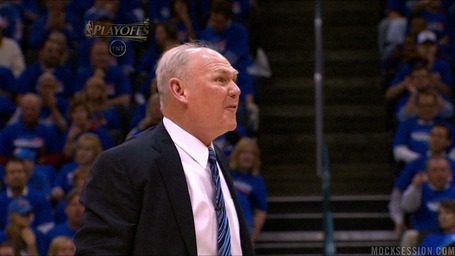 "FFFFFF!" Indeed. But that's how everyone in Denver is feeling right now after going down 0-2 to the Thunder in the seven-game series. Whether it was the non-call on Kendrick Perkins' goaltending in the first game (video), the poor shooting the Nuggets had for the early part of Game 2 or being dominated around the glass by the Thunder, the Nuggets are not in a good place right now.

If Arron Afflalo can return for Game 3 on Saturday in Denver, maybe he can help the Nuggets turn this series around. In Game 2, Wilson Chandler started again with Afflalo out, but he missed all six shots he attempted. Afflalo started to turn into the player everyone would have wanted to make those key shots that the Nuggets haven't been able to sink so far.

Losing this series while at home is possibly the worst thing that could happen.