Blake Griffin won the 2011 Slam Dunk Contest with 68 percent of the fan voting in the final round. He received a 49 on his first dunk which involved a 360-degrees spin. His second brought only a 46. He kept trying to dunk a ball after it bounced off the side of the backboard. In the third round, Griffin bent his right arm around the rim as he made the dunk, reminiscent of Vince Carter. And for his last dunk, Griffin jumped over a KIA Optima. With a choir singing "I Believe I Can Fly," teammate Baron Davis poked his head out of the rooftop window and passed the ball to Griffin, who then flew over the hood of the car. 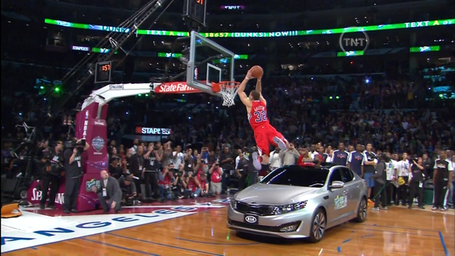 JaVale McGee dominated the first round with a dual-rim dunk. He received a score of 50. On his second dunk, McGee tried to dunk three balls into one hoop. The third ball was the red, white and blue one. It took several tries, but he finally accomplished it by holding onto the rim. He received a 49.

In the final round against Blake Griffin, McGee wore two different colored shoes while he made a dunk that had his head under backboard and his body going away from the basket. Wearing gold sneakers for his final dunk, McGee couldn't compete with Griffin's dunk over a car. 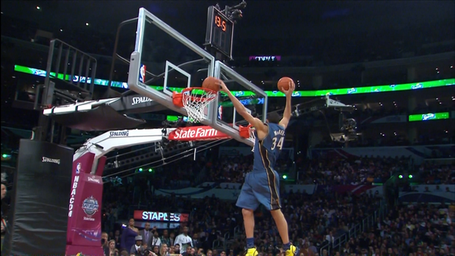 Serge Ibaka saw a 45 for his first dunk, but for his second dunk he involved a kid running on to the court to retrieve a teddy bear. The bear was hanging from an extension bar that was added to the rim. Ibaka then dunked the ball while pulling the teddy bear off with his mouth. However it only resulted in a 45.

DeMar DeRozan received a 44 for his first dunk but then received a 50 for his second dunk.