Remember That That Tim Tebow Billboard? It's About Elvis Dumervil Now

Share All sharing options for: Remember That That Tim Tebow Billboard? It's About Elvis Dumervil Now

Remember last fall when there was a billboard by I-25 urging head coach John Fox to start Tim Tebow for the Denver Broncos? Well, now it's about Elvis Dumervil, who was arrested for aggravated assault with a firearm in Miami over the weekend: 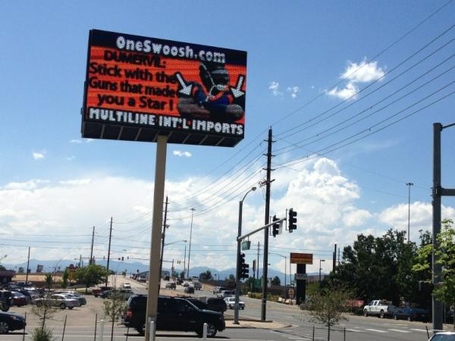 "Stick with the guns that made you a star," the billboard reads. Arrows point to his muscles. Dumervil, as we all know, led the league in sacks in 2009 with 17.0. He then missed the 2010 season due to a torn pectoral muscle and returned in 2011 with 9.5 sacks.