Just because the Denver Broncos aren't in the Super Bowl this year doesn't mean the team won't be represented there. Broncos rookie linebacker Von Miller is there as part of media day, and he was able to interview former Colorado Buffaloes tackle Nate Solder, now of the New England Patriots. 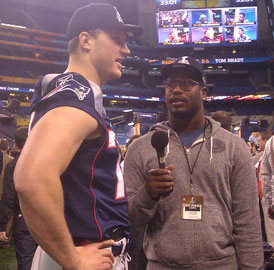 One day, Miller's going to be on the other end of the microphone, answering question about how it feels to be playing in the biggest football game of the year.