The 2012 NFL playoff picture was settled on Saturday afternoon, and the Denver Broncos were the lucky recipients of an Oakland Raiders loss. The Broncos had lost to the Kansas City Chiefs during a late afternoon game, ending the team's win-and-in route to the playoffs. The Raiders game lasted longer than the Broncos' one because the team was close to coming back against the San Diego Chargers. But an interception by the Chargers ended that threat. The Broncos won the AFC West by losing its last three games and through the failure of the Raiders as well.

The New York Giants and the Dallas Cowboys battled for the last playoff spot on Sunday Night Football, the game being flexed to NBC over the Broncos. The Giants took care of business and defeated the Cowboys, 31-14, to win the NFC East and the No. 4 seed in the NFC bracket.

Click on the images below for a complete printable bracket: 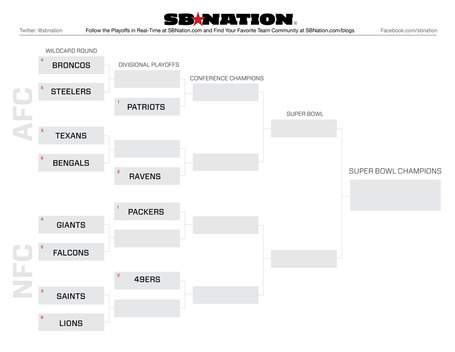 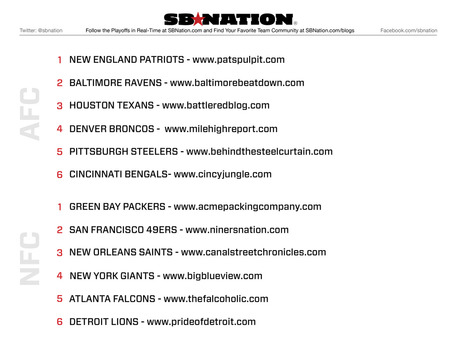 For updates, stay tuned to SB Nation Denver. For more in-depth coverage of this matchup, head to Broncos blog Mile High Report and Steelers blog Behind the Steel Curtain. For more news and notes from around the NFL, visit SB Nation's NFL news hub.