What happens when a quarterback loses the last game of the season, completes 6-of-22 passes in the game and sees his team make it into the playoffs as a result of another team losing as well? Get credit for leading the team into the playoffs, naturally. Check out what the Huffington Post wants us to believe Tim Tebow did for the Denver Broncos on Sunday 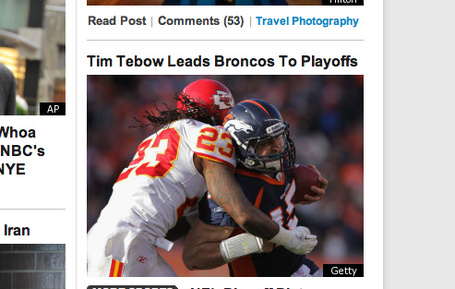 and an updated one later 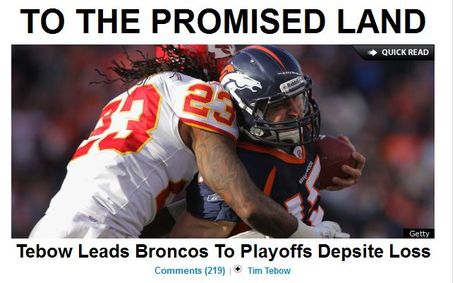 Is that a photo of Kendrick Lewis knocking the ball out of Tim Tebow's hand in the second quarter? You know, the drive that was deep inside of Kansas City Chiefs territory and could have changed the game for the Broncos. Looks like, but I guess there's no point whining about this. The Broncos are in the playoffs after all -- now it's just a matter for how long that will be the case. Find out on Sunday, Jan. 8.