Broncos Vs. Patriots Game Really Did End At Halftime

Share All sharing options for: Broncos Vs. Patriots Game Really Did End At Halftime

Let's face it. Saturday's 2012 NFL Playoff game between the Denver Broncos and the New England Patriots was over at halftime with the home team firmly in control, 35-7. Granted, one might argue earlier times, but let's look at the graph below: 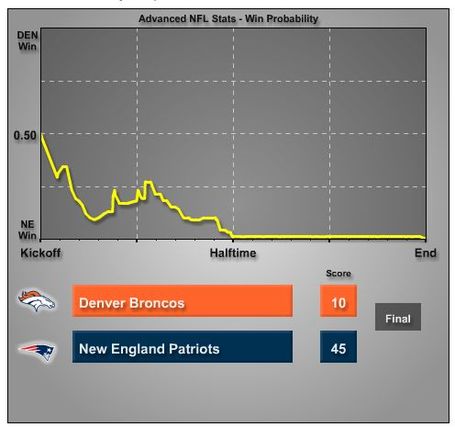 Let's see. Not once did the Broncos ever have a probability at winning this game. At best they had the 50-50 split right at kickoff. And we all know that Tom Brady quickly changed that with the first of his six touchdown passes, this one to Wes Welker.

The game was progressively worse after that, though, as we see above, there was a bit of a move toward the Broncos near the end of the first quarter and at the start of the second. But then we arrive at halftime, where it all bottomed out. It didn't budge at all after that, at least not up toward the Broncos. The only change came when the clock his triple zeroes and the game was officially over.

So, yeah, the game was finished at halftime.