After Week 1's loss to the Oakland Raiders, a Denver Broncos fan went on a message board and let everyone know that he and some of his buddies had $10,000 to buy billboard space in Denver. The fans wanted to tell head coach John Fox that he should start Tim Tebow over Kyle Orton. They gave Orton a bit more time to prove that he could make the Broncos a winner.

With a loss to the Titans on Sunday, it appears other fans couldn't take it any longer. A Tim Tebow billboard at 58th and Logan popped up on Thursday afternoon. Check it out after the jump. 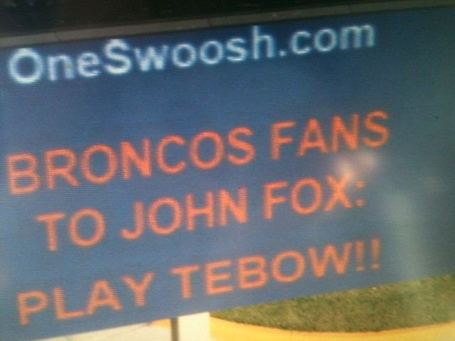 Really? That's what they spent their money on? John Fox isn't going to let this bother him or influence how or when he uses Tim Tebow. While the Broncos could certainly get just the same production out of Tebow as they currently are receiving from Orton, billboards are not going to change how Elway, Fox and Xanders do business.

I think the money would have been better spent by donating it to Tim Tebow's charity, as the second-year quarterback suggested for those other fans.