PHOTO: Tim Tebow Lines Up In The Slot For Denver Broncos

Share All sharing options for: PHOTO: Tim Tebow Lines Up In The Slot For Denver Broncos

The Denver Broncos were so thin at wide receiver on Sunday afternoon that the team's fourth receiver was rookie tight end Julius Thomas. But then he left during the game's opening drive with an injured ankle. So that left the Broncos with their three natural wide receivers: Eddie Royal, Eric Decker and Matthew Willis.

Not so fast on Eddie Royal--a groin injury early in the second quarter took him out of the gain (and who knows for how much longer). Now the Broncos needed to go to their emergency receiver: Tim Tebow. Just look at the photo after the jump: 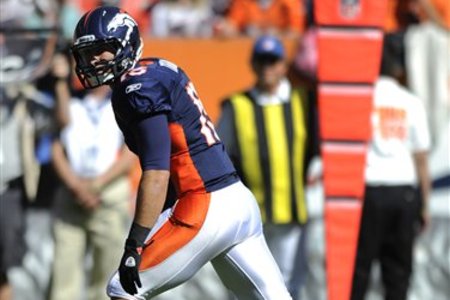 Yeah, that's Tim Tebow lining up in the slot. He never received any passes from Kyle Orton, but he was really just in there to fill in the gap at the position. The Broncos didn't make a roster move because they thought that Brandon Lloyd would have been able to go. He did some warmups in full uniform before he left the field and was declared inactive for the game. Eron Riley could have been promoted from the practice squad, but the team would have had to cut a player at another position.