Denver Broncos quarterback Tim Tebow is participating in the 2011 FedEx St. Jude's Classic Golf Tournament. He's there with his former head coach at Florida, Urban Meyer. And take a look at how Tebow looks these days: 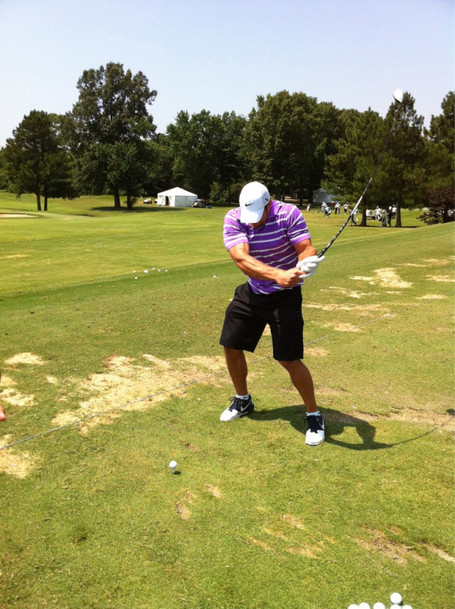 Wow. Look at those shoulders, the barreled arms. He's certainly staying in shape during the NFL Lockout. And he looks to be in good golf form: legs slightly bent, forearm flexed a little bit on the back swing, his right ring finger is interlocked with his left pinky finger, his head is down and presumably his eyes are still on the ball. Or not. My golf game isn't great.

Apparently Tebow and Meyer hit birdie on the first two holes, respectively. They were part of a foursome that also included Zach Johnson and Mike Glenn.

Hopefully this fall there will be less time on the links for Tebow and the rest of the NFL players so we can see them on the gridiron, a much better green field (at least at the start of the game).