When the NFL imposed a lockout on its players, once of the results was the cancellation of the league's annual rookie symposium on how to transition into the NFL. In order to make up for that, the Players Association, well, trade association now since the union decertified and broke up, is hosting its own version called "The Business of Football: Rookie Edition."

And of course the No. 2 overall pick in the 2011 NFL Draft, Denver Broncos linebacker Von Miller, is ready to take it all in: 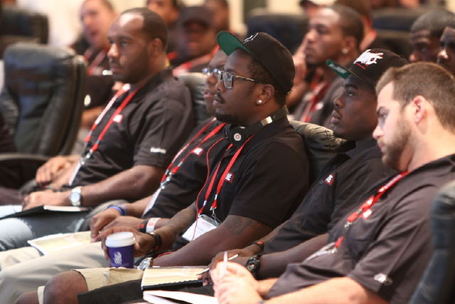 Miller can always be identified with his trademark frames. Miller, recall, is one of the plaintiffs in Brady, et al vs. NFL over the lockout the owners imposed back in March. But back in April when the Broncos drafted Miller, he and Commissioner Roger Goodell shared a hug on stage before holding up a Broncos jersey.

But all we want is to see Miller on the gridiron, chasing after quarterbacks.