When the Denver Broncos selected Texas A&M linebacker Von Miller with the No. 2 overall pick, it could have made for an awkward moment when he went to the stage to meet Commissioner Roger Goodell. See, Miller was convinced to take part in the current legal battle between the players and the league. Miller was brought into the case to represent this year's rookies. 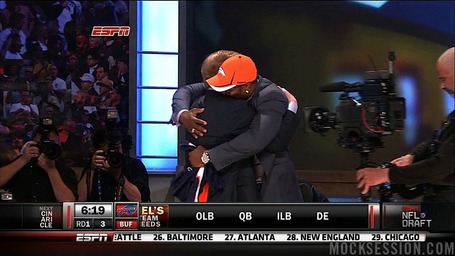 But as you can see, the two embraced in a big hug. Before Miller was selected, ESPN interviewed him and Miller said that he has nothing against Commissioner Goodell and that Thursday night was not a time to deal with any of the ongoing legal battles.

But the commissioner did receive his share of boos during the opening of the draft. Fans started to chant "We want football!" It happened when he opened the draft and then when he returned to the stage to announce the No. 1 overall selection of the draft, Cam Newton to the Carolina Panthers.

Yeah, the fans let him have it.