Share All sharing options for: Tim Tebow Documentary Produced By President Of Fiction

Remember that ESPN documentary from early 2011 that chronicled Tim Tebow's time from the end of his Florida Gators career to his first game as a member of the Denver Broncos, Everything In Between? Well, in case you didn't know this, the film's producer, Chase Heavener operates Fiction, his production outfit.

So, you know, he's the President of Fiction. 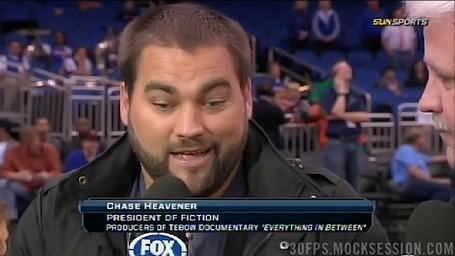 So, for the uninitiated who see that, that probably causes one wonder if FOX goofed on this. But I'm sure many will question if Tebow's story isn't just a work of fiction.