The path to a new stadium for the Colorado St. Rams has been a long path so far. Wednesday night was the 10th and final stadium advisory committee meeting regarding the proposed on-campus stadium. The event was a public meeting and over 200 people attending plus many more interacting through the live blog that the Coloradoan put together; which is a must read for information and debate.

The live blog had the Coloradon staff on hand covering the meeting and there was a lot of information presented on the proposed on-campus stadium, both for and against the idea.

Here is a slide from the meeting about projected revenue and fundraising for the stadium: 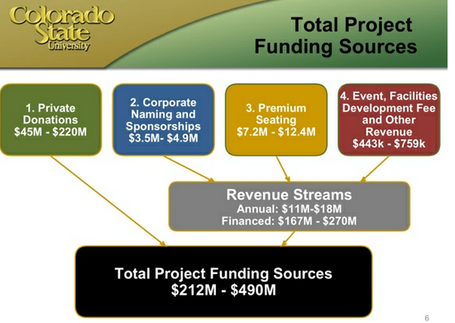 Reading through the comments of the live blog, there are people complaining about that money not being used for things like new dorms or upgrading academics. Those people will always be around, and if the stadium was being funded by tax payers and tuition money then those would be valid complaints.

What they do not realize that by having a stadium that generates revenue will bring in more money to the academic side of the school, and not only funneled back through the athletic programs.

One excellent quote from the meeting that came from Graham was about the need to upgrade the facilities:

"We are not the least bit interested in engaging in a nuclear arms race... against other universities, but CSU does need to compete."

That is an excellent point, Colorado State does not need to compete with Ohio State, Texas and Oregon, but to win a conference title and possibly more they need to have at a minimum the best facilities in the Mountain West. Really that is not a lot to ask for in this conference.

With this being the final meeting, the decision is going to made in August and by Colorado State's president:

CSU President Tony Frank has made it clear that decision on whether or not to build #CSUStadium will be made by him, w/ input from committee

One reason the committee will still be working through the summer is to look into what it would take to renovate Hughes Stadium, if it comes to that.

After the 10 meetings and gauging the reaction of all sides it seems that the community is split on this issue as some are for the on-campus stadium, and others are against it because it seems like a waste of money and a big risk.

Seeing that the money is coming from private donations with no state or school money being used to finance this projects makes the risk small for the university itself.