The Colorado St. Rams picked up a huge victory on Tuesday night at Moby Arena when they beat the No. 18 New Mexico Lobos, 71-63. The Rams snapped the Lobos' seven-game winning streak that had culminated on Saturday with a 65-45 victory over the UNLV Rebels.

When the time clock hit zeros across the board, the fans, of course, stormed the court. Check it out below: 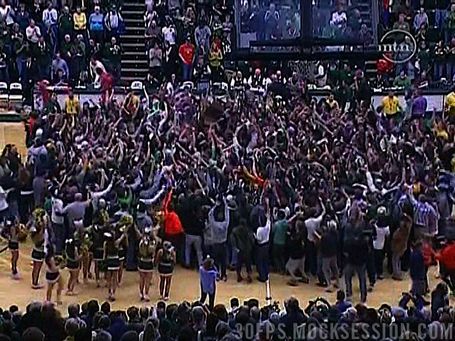 The Rams picked up its 17th win of the season on the strong play of Pierce Hornung (13 points, 15 rebounds) and Dorian (17 points).

The Rams have three contests remaining and the next two come against the San Diego St. Aztecs and the UNLV Rebels, upsetting the latter team at home earlier in the season. Should the Rams pick up a win in at least one of those games, the NCAA Tournament Selection Committee will certainly have Colorado State on its mind for an at-large bid if the team doesn't win the Mountain West Tournament.