So far, Colorado State has shut down a high powered San Diego State offense, well the Aztecs have gifted the Rams two turnovers. However, the Aztecs were finally able to put a touchdown on the board by a one yard touchdown run by Brandon Sullivan. That drive was an 11 play 60 yard drive to eat up four and a half minutes on the clock.

So far, the first half the Rams Pete Thomas has 136 yards compared to San Diego State's Ryan Lindley who has 44 yards in the first half. One would think that would be the opposite the way each of the two teams have played this season.

Below are the first half stats, and San Diego State gets the ball to start the third. 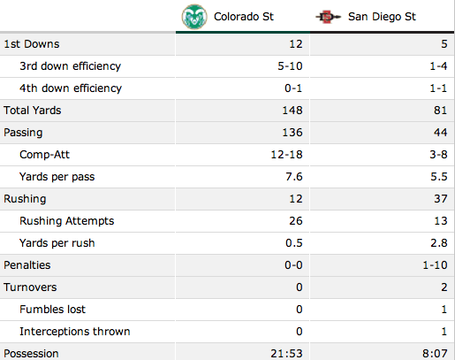