GIF: Todd Helton Gets Expansive Area Call At 1B

Share All sharing options for: GIF: Todd Helton Gets Expansive Area Call At 1B

You know how the second baseman or the shortstop often get an out called at second base for being in the area of the bag even though it's not tagged?

Well, the Colorado Rockies' Todd Helton gets those calls at first base, as seen on Wednesday against the Los Angeles Dodgers: 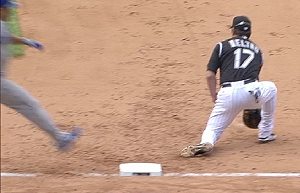 both via Baseball Nation