In the bottom of the seventh inning of the Colorado Rockies' game with the Milwaukee Brewers, Dexter Fowler made a throw to home plate in an attempts to get the out there on the runner who was tagging up. It was a good throw, which Iannetta used to tag out the runner. Look at this photo: 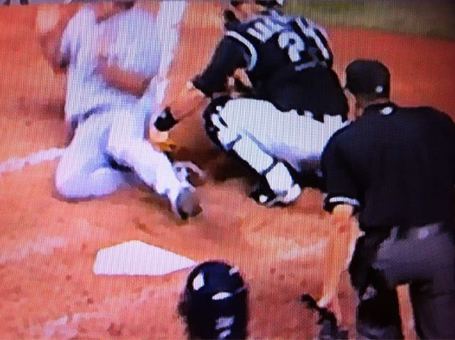 Clearly out, right? Sure, unless one is home plate umpire Cory Blaser. He missed the call. So Chris Iannetta exploded, said "F YOU!!!!!!" a couple of times and got ejected almost immediately. Jim Tracy came out argued as well, gave his own "F YOU!!!!!" to Blaser and was ejected. You rarely ever see those two get that animated, especially to let F-bombs start flying.

Maybe Blaser ejected both of them so quickly because he knew he blew the call and didn't want to admit any wrongdoing.

Eliezer Alfonzo came in and made his debut for the Rockies while Tom Runnells took over the team in the dugout.

Brewers Vs. Rockies: Colorado Loses On Sunday To Split Series With Brewers