In honor of Ubaldo Jimenez's no-hitter thrown on April 17, 2010, the Colorado Rockies gave out Ubaldo Jimenez bobbleheads at the gates on Sunday to mark the one-year anniversary 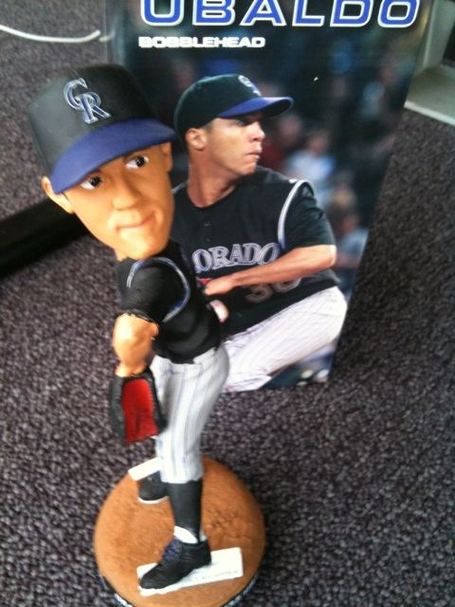 I agree with Renck that the resemblance in the face is more Jason Hammel than Ubaldo, but then do bobbleheads ever really capture the best look for a player.

On April 17, 2010, Colorado Rockies ace Ubaldo Jimenez threw the first no-hitter in Colorado Rockies franchise history when he did it against the Braves in Atlanta in a 4-0 victory. It took just two hours and thirty-one minutes to complete. Jimenez was a bit wild, walking six batters, but he struck out seven batters, too. Jimenez went on to finish third in NL Cy Young voting, but this outing was the start of what could be considered the Year of the Pitcher.

Following Jimenez's no-hitter, Oakland Athletics starter Dallas Braden threw a perfect game on May 12 (Mother's Day) and Roy Halladay threw a perfect on May 29. In June, Edwin Jackson, then an Arizona Diamondback, outdid Jimenez and walked eight batters in his no-hitter. A month later, Matt Garza no-hit the Tigers. Roy Halladay followed his perfect game with a no-hitter in the first game of the 201 NL divisional series.

And that doesn't include Armando Galarraga's lost perfect game when umpire Jim Joyce made a safe call at first base.