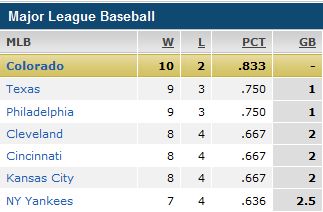 Following their four-game sweep of the Mets in New York, the Rockies stayed a game ahead of the Texas Rangers and the Philadelphia Phillies for the best record in the major leagues in 2011. And seven of those 10 victories have come on the road. The historically poor road team is 7-1 so far this season. Wrap your head around that.

But then someone might argue: Yeah, but look at who the Rockies beat, the Pirates and the Mets. OK, fine they are not world-beaters, but last year on the road the Rockies went 3-4 against them (and like last year, the 2011 road series with these teams were played back-to-back). That's improvement no matter the way it's viewed.

And for now, the Rockies are the only team in the NL West to get hot early. The Giants, after a 1-4 start, have moved to 6-6, recently taking two of three from the Dodgers. The Dodgers, the Diamondbacks and the Padres all follow with under-.500 record.

The Boston Red Sox, who just gave out a seven-year, $154 million contract extension to Adrian Gonzalez, are stuck at the bottom of the league with just two wins in 11 games. Now if one is part of the legions of fans who hate Boston, a ton of laughter and ridicule is coming right now, but we all know that hate toward Boston (and the New York Yankees for that matter) is irrational. They didn't run over your puppy. (But, hey, if they did, go right ahead and hate them all you want).

Surprisingly, the Cleveland Indians and the Kansas City Royals are tied for the AL Central lead at 8-4, though Cleveland has dropped their last two games. Can both sustain this throughout the season?