It's halftime of the 2012 AFC Championship Game and the New England Patriots lead the Baltimore Ravens, 13-10. One of the big contributors to that score has been former Colorado Buffaloes tackle and current New England Patriots starter Nate Solder. On Benjarvus Green-Ellis' touchdown run at roughly the 10-minutes mark in the second quarter, Solder completely dominated all-world linebacker Ray Lewis. Photographic evidence below: 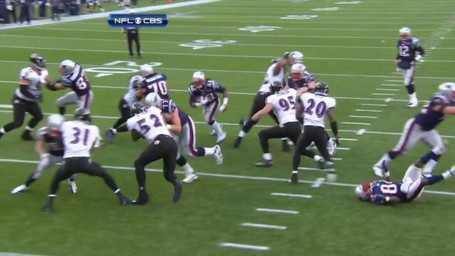 Solder pushed Lewis back on that play as Green-Ellis hit the wide open hole to the right side. He found the touchdown and temporarily put the Patriots in a 10-3 lead. Dennis Pitta caught a touchdown for the Ravens a little bit later and Stephen Gostkowski put the Patriots back in the lead with three minutes to go in the half.

Solder and the rest of the offensive line have paved the way for Green-Ellis to pick up 52 yards on the ground and to average 6.3 yards per carry. What will we see in the second half -- maybe Solder heading to Super Bowl XLVI in two weeks with the rest of his Patriots teammates?