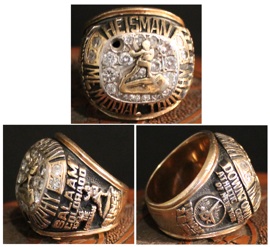 The ring is quite impressive:

The size 11.5 ring is gold, with more than 20 diamonds totaling 1.5 carats. While it is missing a small diamond on the upper left corner of the ring face, it is estimated to sell at a price between $15,000 and $25,000. The ring comes with a certificate of authenticity from Salaam and the auction house. There is a reserve on bidding.

Salaam is not selling the ring just to pocket the cash for himself, but it would be to raise money for his business efforts:

CU spokesman David Plati said he hadn't heard of Salaam selling the ring. Salaam, who lives in San Diego, recently has been marketing mixed martial arts around the world.

"I know he's been through some tough times with his business because of the economy," Plati said Tuesday at the Pac-12 Conference football preview in Los Angeles. "But it's not like he's in dire straits."

The ring is being auctioned by Nate D. Sanders auction house and runs through Aug. 9 with a current bid at $1,000.