Share All sharing options for: The Best And Worst Surrounding National Signing Day

National Signing Day is a huge day for college football with wall-to-wall media coverage throughout the day. Most of the athletes feel relieved when they make their announcement and fax in their Letter of Intent since it signals the end of the recruiting drama. That is typically how it works in most cases, but that is not what happened to Floyd Raven, a four-star cornerback from Reserve's East St. John High School.

A more lighthearted and fun story came out of Georgia today when highly regarded running back Isaiah Crowell decided to sign with Georgia to form Mark Richt's 2011 'Dream Team' recruiting class. Crowell had the usual set up of three hats on the table but instead of doing the played-out hat fake he did pull out a hat from inside a bag that was for Georgia. Then someone off camera brought in a bulldog puppy wearing a Georgia sweater. For creativity Crowell earns the highest grade today and actually made the monotonous aspect of a teenager picking what school he will attend refreshing. 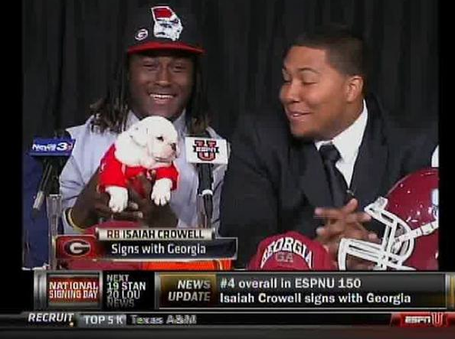