By now, you are already familiar with Paul Stastny's overtime winning goal in last night's exciting 4-3 victory over the Chicago Blackhawks. Unfortunately, since the game was broadcast on Versus Network, home viewers were unable to see the tribute ceremony to the 1996 Stanley Cup team that happened before the puck dropped.

Thankfully, I was fortunate to attend the game. Video and pictures from the ceremony after the jump.

The ceremony started 30 minutes before the Opening Faceoff, with Pepsi Center going dark and this 10-minute video recapping the Avalanche's journey to Colorado and their trip through the 1995-1996 season began playing on the jumbotron.

After the video, the lights in Pepsi Center came back on, revealing a long stretch of empty red carpet. Master of Ceremonies Alan Roach stood at a podium on the ice opposite of the bench. One by one, Roach named the coaches of that 1996 squad, with Joel Quenneville (now the coach of the visiting Blackhawks) getting the loudest cheer. Former head coach Marc Crawford received a mixture of cheers and boos, likely because of his role in the Steve Moore-Todd Bertuzzi incident.

After the coaches, the players were introduced in order by jersey number. The loudest cheers were for Joe Sakic, Patrick Roy, and Peter Forsberg. Claude Lemieux and Valeriy Kamensky also received vigorous applause. 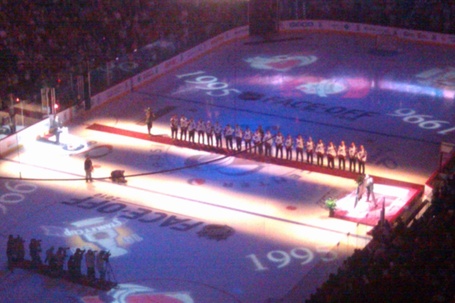 After the entire was brought out, Captain Joe Sakic said a few words to the crowd, thanking them for their continued support and for how welcoming the city of Denver had been to every man on the ice. 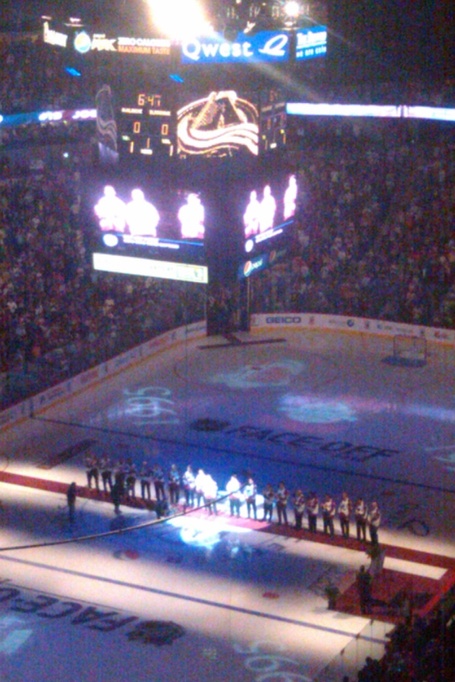 When Sakic was done speaking, Alan Roach announced the roster of the 2010-2011 Colorado Avalanche, with defeaning roars for Craig Anderson, Paul Stastny, Matt Duchene, and Brandon Yip. The two teams faced each other, with current captain Adam Foote, the only Avalanche member still playing from that 1996 team, switching over sides and putting on his new jersey overtop of the retro jersey he was wearing when first introduced. 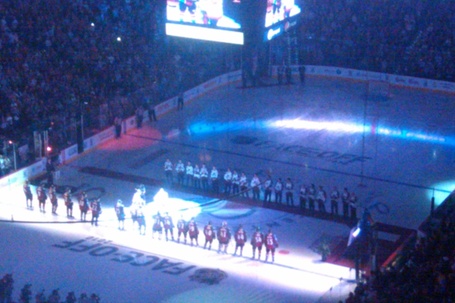 At this moment, there was no doubt that Colorado was going to win that night's game. The Pepsi Center was rocking, the players were excited, and the 2010 Colorado Avalanche season began with a bang.