For the second year in a row, the Air Force Falcons football team's senior arrived at the White House to be honored by Pres. Barack Obama for their Commander-in-Chief's Trophy victory. This was the 18th time the Falcons won the trophy. Pres. Obama received an Air Force jersey with the No. 18 on it to signify that victory, but he also got his hands on the game ball from the team's victory over Navy.

However, the President wasn't allowed to have it unless he struck a Heisman pose. Check it out below: 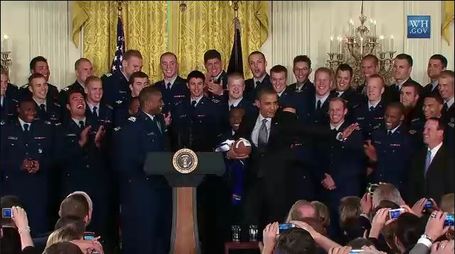 Compare that to the one his wife, Michelle, did back in March (and an earlier pose he did years ago). No one is near perfect in any of the attempts, but the First Lady certainly has more restrictions when she does it because of her attire.

Maybe the President will figure it out next year, when the Falcons come for the third time.