The TCU Horned Frogs started the 2011 baseball season by going 2-1 against the Kansas Jayhawks and fell from the third spot to the fourth spot in the latest Baseball America's top 25 poll. TCU is the only Mountain West team in the top 25, but this past week the New Mexico Lobos were swept by the Arizona State Sun Devils who moved up from the 11th ranked spot to the number nine spot.

The San Diego State Aztecs also played a ranked team against the Vanderbilt Commodores, but the Aztecs were defeated 7-3. The Commodores switched places with TCU to take over the number three spot in the latest rankings.

TCU's next two opponents are both ranked as they take on No. 16 Baylor (2-1) in a single game this Wednesday and then they take on No. 12 Cal State Fullerton in a three-game series in Fort Worth, Texas this upcoming Friday, Saturday and Sunday. 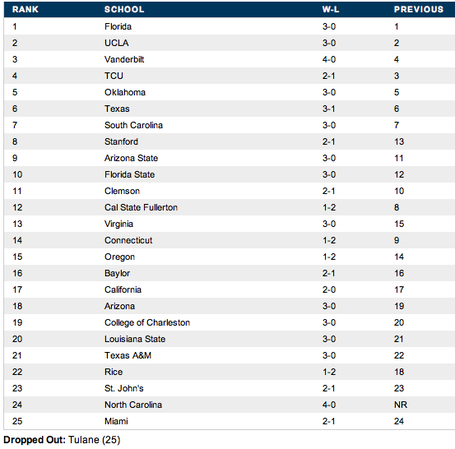