Both teams are going for it on fourth down just about any time they have the chance. So far in the first half there have been 12 fourth down attempts with two punts, two field goals and eight plays where either team went for it. On those fourth down attempts Air Force converted one of their four attempts while Georgia Tech has made one of the their two attempts. In one of only three punts in the first half, Georgia Tech boomed one deep and gave Air Force the ball with 56 seconds left, at their own 19-yard line and Air Force had two timeouts to work with.

Air Force then went into passing mode as Tim Jefferson moved the Falcons down the field by completing four-of-seven passes. The first three completions went for 11, 19 and 17 yards respectively to put Air Force in position for at least a field goal. After a seven yard pass interference penalty against Georgia Tech's Jeremiah Attaochu, and another seven yard pass the Falcons went for the end zone a few times but failed to convert. So, the Falcons who have had some issues in the kicking game brought out Zack Bell to attempt a 41-yard attempt which he made, and what is the point of icing a future Air Force Cadet.

So far the game is moving quite along as expected with these two option offenses, but the scoring is very similar to the game when Air Force played Navy which featured little scoring in a 14-6 Air Force win.

Air Force has missed out on a few chances to score points in this game. They completed a fake punt to get a drive alive, but only to on a few plays later have wide receiver Jonathan Warzeka drop a pass that could have been a touchdown or at worse give the Falcons the ball in the red zone. On that same drive on a fourth down play Warzeka was tackled for a loss on a running play.

Neither team has gotten into a groove or has been able to convert on third or fourth down. Georgia Tech has the best drive of the game when they scored the touchdown in the first quarter. Expect for both teams to make some half time adjustments and be more conservative on fourth downs by perhaps punting instead of going for it. 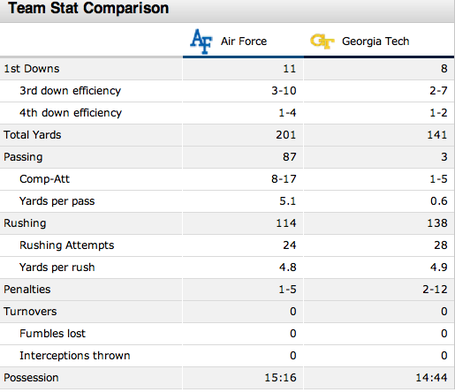