Out of all of the college football polls, Air Force received one single vote which came from the coaches poll. Now, in this place normally there would be a list of games that would help Air Force become ranked, but since the Falcons are on the verge fo falling out of the polls. All what matters is if they can beat the Utah Utes who are ranked eighth in the latest BCS standings.

On first glance that may seem a tough task with Utah being ranked so high, but in fact Air Force has been able to compete and beat Utah over the past decade. Even when the Utes were making BCS runs the most difficult game on Utah's schedule has been Air Force.

In 2008 the Utah was down at the half against Air Force and used a big second half to beat the Falcons by only seven points. That 2008 was considered Utah's best ever, and finished second in the AP poll after they beat Alabama in Sugar Bowl.

This history of close games is also why Air Force is only a seven point underdog in Saturday's game. 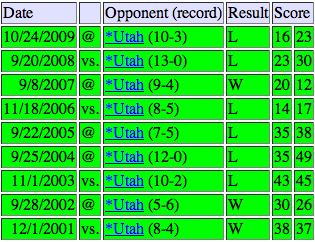 The Falcons face a similar team in Utah as they did in their recent loss against TCU which means the Falcons will need to have a near perfect game to pull of this upset.

To catch the game it will be shown on CBS College Sports with a 5:30 p.m. mountain kick-off.