Even though this is a low scoring game the game is not lacking in excitement or offense. Air Force had two early chances to put points on the board but they missed a field goal and Tim Jefferson threw a pick deep in Aztec territory.

The stat of the game is time of possession where Air Force held the ball for 20 minutes while San Diego State had the ball for just under ten minutes. Both offenses are performing well with Air Force having a slight lead in total yards.

Air Force has thrown 14 passes which is a lot for them even in a full game, and that it is two more times then the pass happy Aztec offense, and they have more passing yards then San Diego State.

The second half the Falcons need to capitalize on their drives and start getting touchdowns instead of field goals, because San Diego State can strike very quickly. 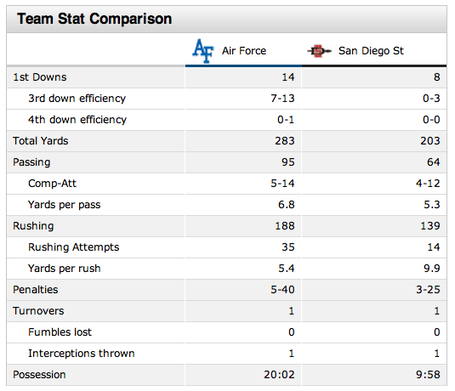