The heavily-favored United States women's eight rowing team backed up the hype and won their second-consecutive gold medal thanks to a wire-to-wire win at the 2012 Summer Olympics in London on Thursday. After jumping out to an early lead in the 2,000m race, the American boat never relinquished the lead.

It was a particularly emotional win for team USA member and Aurora-native Taylor Ritzel, who dedicated her performance to her late mother, Lana, who passed away on Nov. 15, 2010, after a battle with cancer. John Henderson of the Denver Post caught up with Ritzel after the race, and she was grateful to be able to dedicate the win to her mother:

"I haven't had time to think about it. I had a race to focus on but now that it's over I'm so excited that I could give this to her. Walking the course today I saw the sun kind of peek through the clouds and I know she's here. I dedicate everything I've done to her." 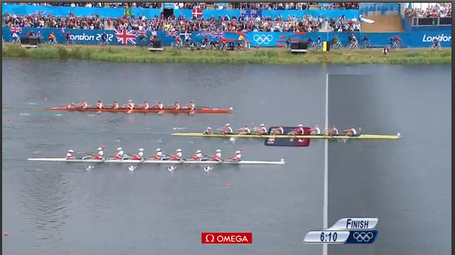 Here's a look at the top finishers from the event, as well as medal-worthy times:

For more, stay tuned to SB Nation Denver and check out SB Nation's 2012 Summer Olympics hub. Stay up to date on the medal count with Sports Illustrated's tracker.