If you buy something from an SB Nation link, Vox Media may earn a commission. See our ethics statement.

The 2012 Tour de France kicks off on Saturday with a prologue in Liege, Belgium, and remains in Belgium for the first couple of stages. Beyond that the race heads to the English Channel and gets close to Paris, but it won't be until the end of the race when the cyclists ride into Paris.

The race, once it reaches Rouen, turns to the eastern portion of the country, which means trips through the Vosges, the Jura and the Swiss Jura to start. Then the riders head into the Alps for six stages while the big push comes in the Pyrenees for 11 stages. There will be a total of 25 stages that involve mountains in some form or fashion.

The last few stages of the race turn north to Paris, with the final stage running from Rambouillet to Paris' Champs-Élysées. That will likely be a victory ride for whatever rider is wearing the yellow jersey that morning.

Here is a map of the course (via letour.fr): 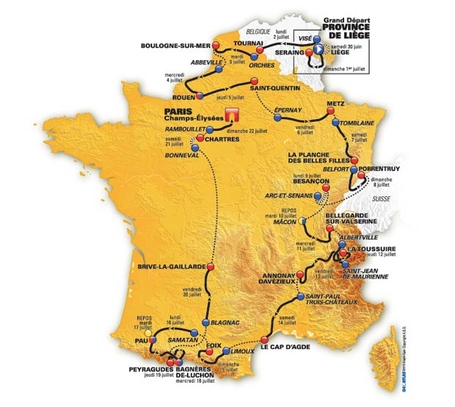 SB Nation Denver is your source for 2012 Tour de France updates on Team Garmin-Sharp, and be sure to visit cycling blog Podium Cafe as well. You can also catch up on results and storylines from the 2012 Giro d'Italia here.