The 2012 Winter X Games crowned Colten Moore its snowmobile freestyle gold medalist on Thursday night. Moore advanced to the final round along with his brother Caleb Moore, Joe Parson and Heath Frisby. On his first run, Colten scored a 92.66 and was in first place at the end of the first heat. He then outdid himself with his second run, capturing a score of 93.66. Check it out:

No one else came close on a second run to challenge Colten's score. That's largely a result of the crazy flips Colten was able to do in mid-air while hanging in front of his snowmobile. Luckily, he was able to hold on to during all of his run this time around. Joe Parsons scored 90.66 on his first run but had just an 89.00 on his second. Caleb put up an 86 and scoring 87 on his first run. Heath Frisby improved on his second run from an 80 to an 82.66.

Moore picked up his first medal at the Winter X Games and he celebrated his gold in style: 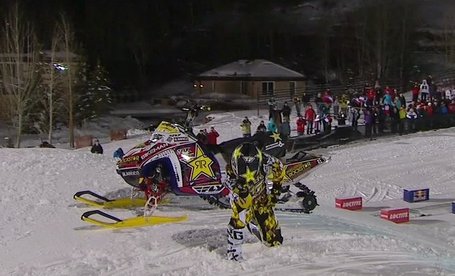 #Tebowing! It was the only way he could think of celebrating his victory, and, of course, he is in the state where Tim Tebow plays football.