The San Francisco Giants may have received a serious blow to their season in Wednesday's night's loss to the Florida Marlins with an injury to catcher Buster Posey. On what turned into the game-winning play, the Marlins' Emilio Bonifacio hit a sac fly to right field in the top of the 12th inning, allowing Scott Cousins to tag up from third base to score the go-ahead run.

Cousins did just that, but he collided with Posey on the play: 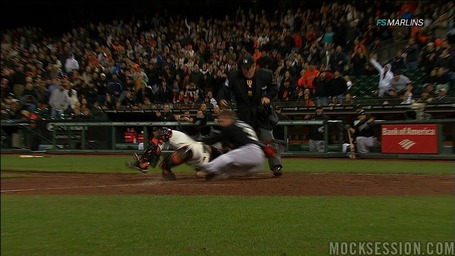 That left ankle shouldn't be like that. He left the field with the help of two trainers and underwent X-rays, but the results had not been made public as of Thursday morning. He will have an MRI on Thursday, too.

Posey is hitting .284/.368/.389 on the season. His 1.8 fWAR (FanGraphs Wins Above Replacement) is second best among all catchers (qualified and unqualified), though he has just four home runs and five doubles.

This could be the second major injury to a National League West team this week, as the Colorado Rockies lost Jorge De La Rosa for the season with a torn UCL. Without any  hard knowledge of his X-rays and MRI results, it would be silly to speculate how this affects the Giants going forward in the long-term.