The Denver Pioneers have advanced to the semifinals of the 2011 NCAA Lacrosse Tournament. They are just two victories away from capturing their first lacrosse championship.

Share All sharing options for: Denver Pioneers Lacrosse: A Rising Story In The 2011 NCAA Lacrosse Tournament

Do the Colorado Rockies have you wondering where that hot April start has gone? Tired of the NFL Lockout since the only news coming out these days involves legal battles in court? Still wondering where the Denver Nuggets are heading in the post-Carmelo Anthony? Hoping things can't get worse for the Colorado Avalanche?

If any of the above applies, there's one team you can turn your attention to and know that you're following a good story. I am, of course, talking about the University of Denver's lacrosse team. On May 28, the No. 6 Denver Pioneers will play the No. 7 Virginia Cavaliers in the semifinals, the winner advancing to the championship game to play either No. 5 Duke or Maryland.

The Pioneers went 11-2 in the regular season, picked up two more wins to capture the 2011 ECAC Lacrosse tournament and then drew the No. 6 seed in the 2011 NCAA Lacrosse Tournament. That draw marked the first time a team west of the Mississippi River would host a tournament game.

And the Pioneers didn't disappoint. Playing at Peter Barton Lacrosse Stadium, the Pioneers defeated the Villanova Wildcats, 13-10, in the opening round of the tournament. Freshman midfielder Jeremy Noble (4G, 2 A) and freshman goalie Jamie Faus (12 saves) both proved influential in the win.

On Saturday, May 21, the Pioneers traveled to the campus of Hofstra University to play the No. 3 Johns Hopkins Blue Jays, a nine-time NCAA Lacrosse Tournament champion, in the quarterfinals. I had the opportunity to attend this game. 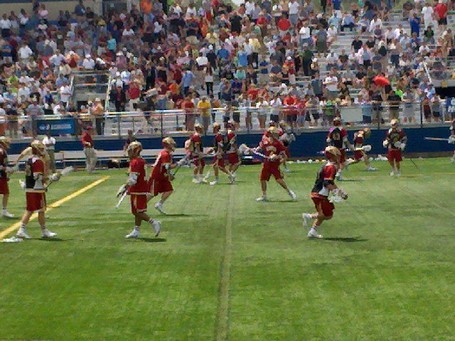 Here the Pioneers warm up before the game. This was the second game of the day, as No. 7 Virginia upset No. 2 Cornell to start the day. 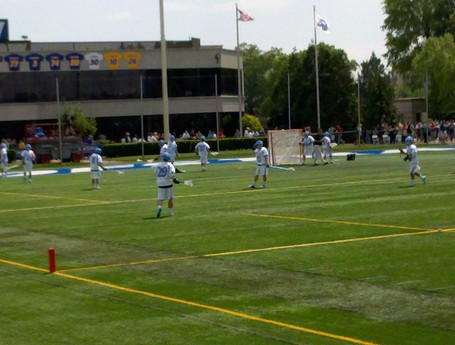 Johns Hopkins also practicing before the game. Would the favored Blue Jays be able to shutdown the upstart Pioneers? 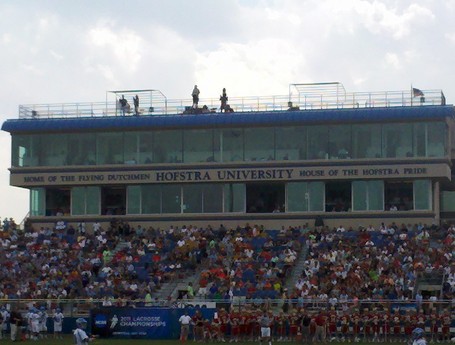 Viewers on ESPN2 saw the game through the camera on top of the Hofstra press box seen above. 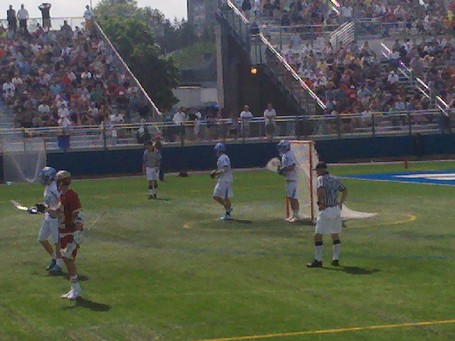 DU's Mark Matthews looks on, waiting for the Pioneers to make an attack. Matthews had a goal and two assists. 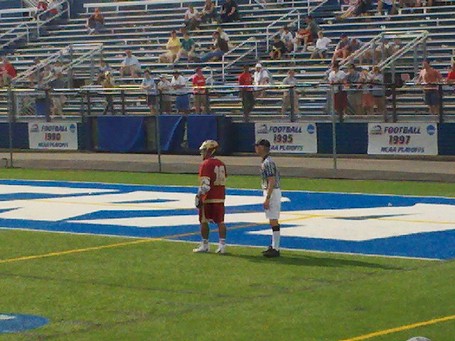 Cameron Flint was a huge part of the Pios success on Saturday afternoon. He had three goals on six shots (five on net). Here Flint surveys the field, looking to find an open man. The Pioneers didn't try to force many shots, instead setting things up and keeping a relentless attack on the Hopkins defense. 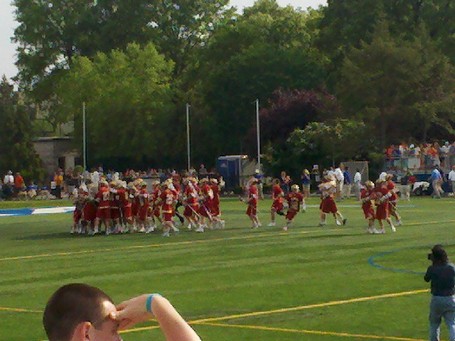 And that offensive attack led to the Pioneers winning, 14-9. Though the Blue Jays had brought the game to within one point in the third quarter, the Pioneers regained the momentum in the final quarter. 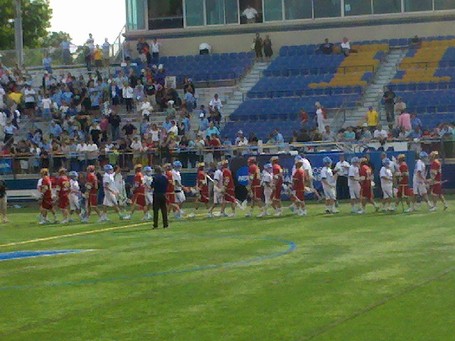 Tierney, though, is no stranger to going this deep in the tournament. Before joining DU in July 2009, Tierney coached the Princeton Tigers for 22 years, won six championships and appeared in the finals eight times. Mile High Sports has a good profile on Tierney's decision to move west and the impact he has had since then.

No matter the outcome this coming weekend, the Denver Pioneers have done Colorado proud this year.