Share All sharing options for: Minnesota-Duluth Hockey Wins The 2011 Frozen Four In Overtime, 3-2 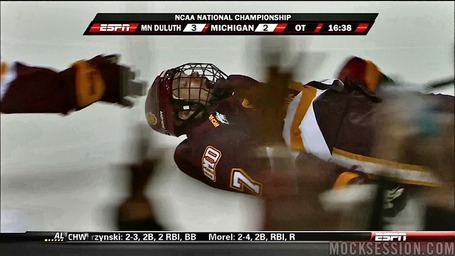 This was hard-fought game for both teams. Michigan held a 1-0 lead after the first period on a Ben Winnett goal, but Minnesota-Duluth battled back with two goals in the first 10 minutes of the second period (Travis Oleksuk, Max Tardy (power play)). Michigan's Jeff Rohrkemper, however, tied the game at two with little more than two minutes left in the period. That period also saw eight penalties between the two teams.

After a scoreless third, it didn't take too long for the game to be decided in overtime. Video via @bubbaprog, as well:

After the puck gets out of the corner, Duluth moves things to the other side of the net and is able to get the puck to an oncoming Kyle Schmidt, who bangs it in for the victory. He scored that goal on Shawn Hunwick, brother of current Colorado Avalanche player Matt Hunwick.

Hunwick made 25 of 28 saves for Michigan, while Kenny Reiter stopped 22 of 24 shots in the victory.

Congratulations to the Minnesota-Duluth Bulldogs on their first Frozen Four championship!