The bracket for the 2011 FCS playoffs was released Sunday morning, and after defeating Montana State 36-10 on Saturday in the 111th Brawl of the Wild, the Montana Grizzlies were awarded the No. 4 overall seed. Montana State, despite finishing the season with a 9-2 record, will go unseeded, though they will have a first round bye.

In the second round, Montana will take on the winner of the opening round game between Tennessee Tech and Central Arkansas, while Montana St will take on New Hampshire in their second round match up. Interestingly enough, a rematch between the Grizzles and Bobcats is possible, as both teams were placed in the upper half of the bracket. If Montana wins out and reaches the semifinals, they could face Montana State if the Bobcats beat New Hampshire and then go on to defeat, presumably, Sam Houston State, who claimed the No. 1 overall seed. But that potential rematch is far, far down the road, and for the time being, both Montana and Montana State have more pressing issues to worry about.

Here's a printable version of the bracket, and here is the bracket in full. 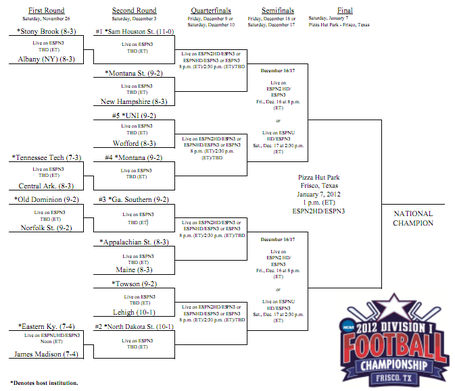