Share All sharing options for: Caleb Hanie, You Deserve A Game Ball; Jay Cutler, Well, Fans Are Burning Your Jersey

Sure, the Green Bay Packers won the NFC Championship today over the Chicago Bears, but Bears third-string quarterback Caleb Hanie deserves a game ball for his performance today.

Hanie is a former Colorado St. Rams starting quarterback (college bio) who now has many people wondering who he is. The correct answer at the moment is: He's a much better quarterback than Jay Cutler, a former Denver Bronco. Cutler failed miserably earlier today, completing just six passes on 14 attempts for 80 yards and an interception. Hanie completed 13-of-20 passes for 153 yards, a touchdown and two interceptions. He also helped set up Chester Taylor's touchdown run.

You, sir, deserve a game ball for today's performance.

Cutler left the game with a knee injury and was replaced by Todd Collins to start the second half. And well, Collins couldn't do much either. He completed zero passes on four attempts before Hanie entered in the fourth quarter. And since Hanie was the third quarterback that meant neither Cutler nor Collins could re-enter.

Chicago fans are arguably angered over the loss and the performance of Cutler. Taking a page out of Cleveland's anger toward LeBron James, Chicago fans are burning Jay Cutler's jersey. This might be just a bit excessive.

This is the look of a defeated quarterback in the third quarter: 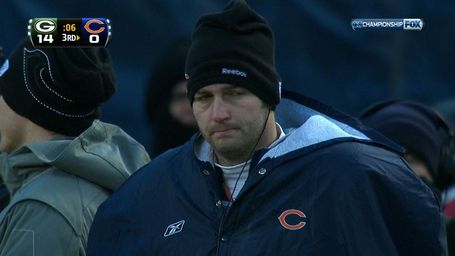