Rose Bowl: No. 3 TCU Vs. No. 5 Wisconsin Predictions

If you buy something from an SB Nation link, Vox Media may earn a commission. See our ethics statement.

Share All sharing options for: Rose Bowl: No. 3 TCU Vs. No. 5 Wisconsin Predictions

The Granddaddy of all of the bowl games is the Rose Bowl and this year's matchup will be the first game since1936 that will feature a team not from a current BCS league and is only the fourth time since 1946 that the Rose Bowl will not feature a Big 10 vs. Pac-10 matchup (this excludes the two games when the Rose Bowl was for the BCS title).

This game will be a battle of the trenches, because all of the talk is about how Wisconsin's vastly larger offensive and defensive lines will just push them around all day. However, if you speak TCU's defensive coordinator Dick Bumpus he compares the TCU defense to the Wisconsin rushing attack as a ferrari in the path of a dump truck. That analogy sums up the type of players that each school recruits with Wisconsin getting the beefy boys while TCU goes after as much speed as humanly possible.

TCU is a field goal favorite in this game, but TCU coach Gary Patterson is really playing up the underdog roll:

The casual fan who will tune into tis game will believe that TCU is the underdog since they come from the Mountain West. For those wondering, TCU has had five seasons of 10 or more wins in the past decade and have been ranked in the top 10 for 24 consecutive weeks with 14 of those weeks in the top five.

Wisconsin's offense will be lead by that powerful offensive line and will run the ball with their three primary backs in John Clay, James White and Montee Bell. The three have combined for 1,900 yards and 44 touchdowns. That running game will be what Wisconsin will lean on to get past the TCU defense.

For the special occasion of making the Rose Bowl, TCU added a small rose to their helmet. 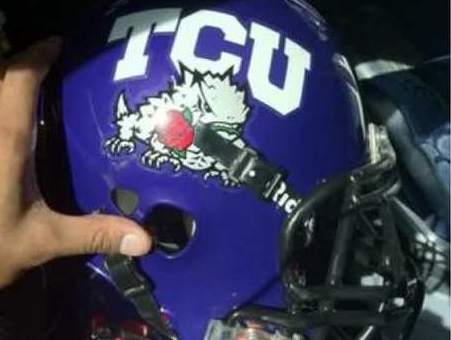 Now onto the predictions.

Rivals - These four writers are split between TCU and Wisconsin while the Yahoo users favor Wisconsin with 61 percent of their selections.

USA Today - Five of the eight writers take TCU for the win.

AccuScore - The computer takes Mississippi State at a surprisingly high rate of 63 percent of the time and by the score of 31.7 to 25.