The reincarnation of 'Catholics vs. Convicts' takes place in today's Sun Bowl where Miami and Notre Dame are meeting up for the first time since 1990. This past year it was announced that the two schools would renew their series starting in 2012 in a game at Solider Field. Here is what it looked like the last time the two teams played.

Both teams are coming in opposite directions with Notre Dame riding a three game winning streak by beating Utah, Army and USC. While Miami recently fired head coach Randy Shannon and brought in Temple's Al Golden to take over. MIami will be coached by offensive line coach Jeff Stoutland for this game. Stoutland's main concern is picking a starting quarterback between Jacory Harris and freshman Stephen Morris and ultimately Stoutland went with Harris to start today's game.

El Paso, Texas is not known for really cold weather, but for this game they needed to bring out the snow plow to clear the field. The field will be fine by today since the weather is to be sunny and a high in the 40s. 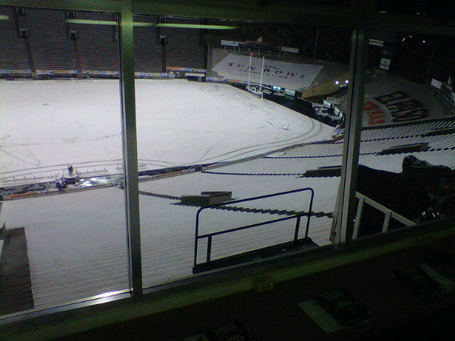 The line on this game has Miami as a four point favorite over Notre Dame, and now onto the predictions.

Rivals - The Rivals writers are split at two apiece between Notre Dame and Miami, and the Yahoo users favor Miami with 58 percent picking the Hurricanes.

USA Today - Six of the eight are taking Notre Dame to beat Miami which goes against what most of the other writers are saying.

Fanhouse - Brett McMurphy makes his picks by the spread and takes Miami to cover the three point spread.

AccuScore - The computer takes Miami to win this matchup by an average score of 26.6 to 22.5 and has MIami winning 61 percent of the time.

The Sun Bowl kicks off at 12 p.m. (MT) On CBS and is being played at the Sun Bowl in El Paso, Texas.